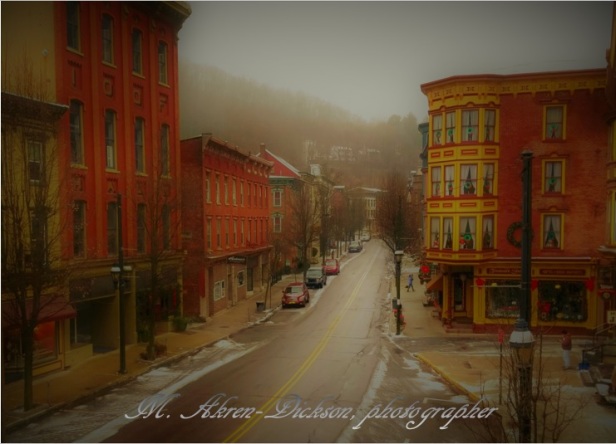 I announced a couple of days ago that I’m finally done (after nearly five years) with my writing Work-In-Progress. My WIP, as I affectionately called it, can’t even go by that name any more. What should I call it now? FIP? As in Finished Project?

Even though I say it’s finished, I can’t seem to leave it alone. And even though I’d decided that by the time I sent off my first query letter it would be a polished gem, refined and gleaming and ready for print, I have to admit I spent an anxious couple of hours yesterday doing another round of speed proofreading and tweaking. And I’ve roped my poor dear hubby into proofreading it too, albeit at a slower pace. Every time I see him pick up his pen to scribble a note as he’s reading my FIP on his computer screen, I have a moment of high anxiety. What was THAT about? How much more can be wrong with it? What was I thinking, sending out that query letter?

And now I’ve convinced myself that I have to go back up to Jim Thorpe, Pennsylvania to  do more research, you know, just to refine a detail or two, take a few pics. I was there at least three times last year, and a couple of times the year before. For research.

If it’s possible to be addicted to a small, charming mountain town, then I think I must be. I’ve already been up there once this year (a nearly six hour drive) in early January, having talked my best friend into it. We did actually drive around beyond Jim Thorpe to points of interest related to my then-called WIP. Unfortunately, I’d picked early in the week, early in the year during sleety, gloomy weather for our January visit four our visit. It was clearly bad planning, and didn’t let my friend see how charming Jim Thorpe truly is. Very little was open, the train tour wasn’t running, driving the mountain roads was mildly treacherous, and being outside became uncomfortably cold after a few minutes. But as we walked the streets of Jim Thorpe, stopping into the handful of shops that were open and taking in the views of the mountains that loom all around, I fell in love with it all over again. I’ve read that it’s called the Switzerland of America. I can see why.

So, this coming week while I maintain surveillance over my phone, mailbox, and email for a response to my query letter, I may hand off the mailbox watching to my hubby and see if my friend, sister or daughter are willing/able to be my partner in crime once again, and head back to Jim Thorpe. Later in the week, if possible, when more is open and hopefully with better weather forecast.

I don’t know. I might not be able to be that far away from the mailbox.